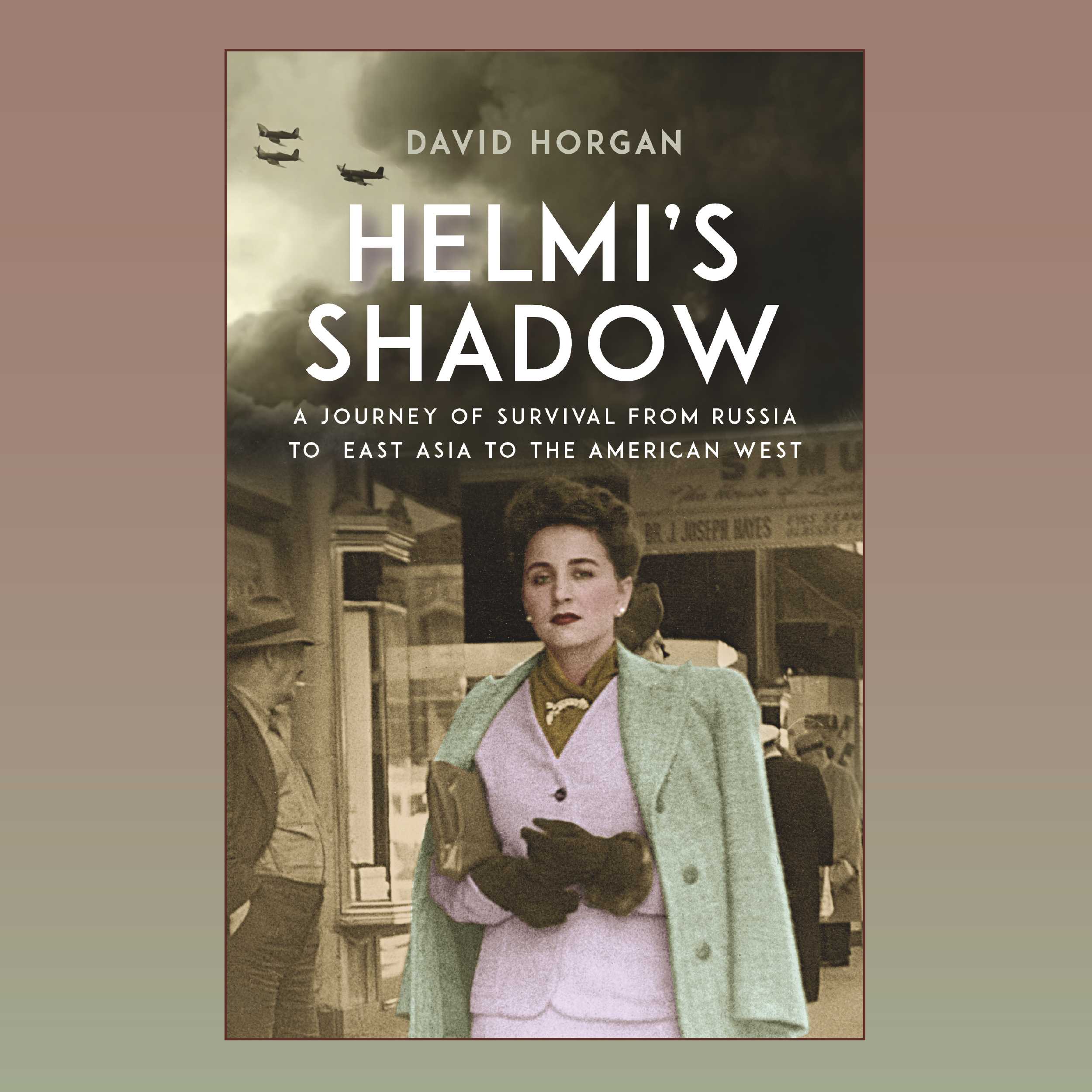 Helmi's Shadow
A Journey of Survival From Russia to East Asia to the American West
$20.00

Helmi’s Shadow tells the sweeping true story of two Russian Jewish refugees, a mother (Rachel Koskin) and her daughter (Helmi). With determination and courage, they survived decades of hardship in the hidden corners of war-torn Asia and then journeyed across the Pacific at the end of the Second World War to become United States citizens after seeking safe harbor in the unlikely western desert town of Reno, Nevada. This compelling narrative is also a memoir, told lovingly by Helmi’s son, David, of growing up under the wings of these strong women in an unusual American family.

Rachel Koskin was a middle-class Russian Jew born in Odessa, Ukraine, in 1896. Ten years later, her family fled from the murderous pogroms against Jews in the Russian Empire eastward to Harbin, a Russian-controlled city within China’s borders on the harsh plain of Manchuria. Full of lively detail and the struggles of being stateless in a time of war, the narrative follows Rachel through her life in Harbin, which became a center of Russian culture in the Far East; the birth of her daughter, Helmi, in Kobe, Japan; their life together in the slums of Shanghai and back in Japan during World War II, where they endured many more hardships; and their subsequent immigration to the United States.

This remarkable account uncovers a history of refugees living in war-torn China and Japan, a history that to this day remains largely unknown. It is also a story of survival during a long period of upheaval and war—from the Russian Revolution to the Holocaust—and an intimate portrait of an American immigrant family. David reveals both the joys and tragedies he experienced growing up in a multicultural household in post\-Second World War America with a Jewish mother, a live-in Russian grandmother, and a devout Irish Catholic American father.

As David develops a clearer awareness of the mysterious past lives of his mother and grandmother—and the impact of these events on his own understanding of the long-term effects of fear, trauma, and loss—he shows us that, even in times of peace and security, we are all shadows of our past, marked by our experiences, whether we choose to reveal them to others or not.
Author Bio
David Horgan is a writer and professional musician. His book of short stories titled The Golden West Trio Plus One received the Merriam-Frontier Award from the University of Montana. His stories and essays have appeared in a number of publications, including The New Montana Story, The Best of the West, Portland Review, Quarterly West, Northern Lights, and The Crescent Review. Born and raised in Reno, Nevada, he now lives in Missoula, Montana.
Reviews

“While this book serves as a haunting memoir, it also quickly becomes a fascinating history of the conflicts between China and Japan, of life in Russia, and, of course, events in the Second World War. Horgan’s research is meticulous and enticing, with detailed maps and rare photos which deliver rich substance to his warm, inviting narrative.” —Billings Gazette

"Helmi’s Shadow is an absolute candy fix for politophiles and historophiles. . . . Quick, colorful chapters give the reader vivid pictures of harsh times of long ago." —New York Journal of Books

"Helmi's Shadow accomplishes that near-miracle of the best literature: It makes the world new. David Horgan has excavated the story of an amazing woman, his late mother, with such rigor and insight that her personal journey becomes a way for the reader to re-see 20th-century global convulsions, and experience them in an intimate and sensory way. This beautifully written, riveting account is a treasure and an illumination."
—Dierdre McNamer, author of Red Rover

“This is a story that might have been lost about a woman who might have been lost. It is the double account of a life lived through statelessness and war and of the detective work it took to retrieve that life. David Horgan skillfully weaves together a family saga that runs from the Pale of Settlement to Reno, Nevada, and an account of his own journey back from Reno to Russia, Shanghai, and Kobe, Japan. The elements of his story are at once the episodes that make up his mother’s life and a mini-history of the 20th century. Unraveling one life, Helmi’s Shadow finds a thread that takes it across half the globe.”
—Michael North, professor of English, UCLA,  author of Reading 1922 and Camera Works

"Helmi’s Shadow is a vivid family narrative that illuminates large historical issues, beginning with pogroms in Tsarist Russia, continuing with a series of exile experiences in China and Japan, and culminating in the simultaneously upraising and uprooting experience of immigrant life in post-World War II America. David Horgan has written a mighty book on a mighty theme."
—Richard Drake, Lucile Speer Research Chair in politics and history, University of Montana

"The story is gripping, and Horgan is an outstanding writer. Given that so much of the literature on Jews in Shanghai is devoted to the refugee community that arrived between 1937 to 1941, the history of the Russian Jews is still, for the large part, overlooked and unknown. Moreover, the depiction of the lives of two Russian Jews living in Kobe, Japan during the Second World War adds to our knowledge of Jews in Asia. I would recommend this book in a heartbeat."
—Kevin Ostoyich, professor of history, Valparaiso University